Welcome to this edition of Workshop at the Ranch (WATR.) The Profoto B1 500 Air battery powered strobe system with High Speed Sync provides a BIG BLAST of flash that freezes outdoor sports action during broad daylight. This month’s WATR article features images, exposure camera data, and a Step-by-Step lesson on how I setup this amazing lighting system.

When more power than 4 Nikon Speedlights can provide are needed to do a job I have added the Profoto B1 strobe and its incredibly reliable “dedicated” High Speed Sync into my sports action location lighting arsenal.

Why the need for more power?

For athlete safety some sports simply need more distance between the subject and the flash (aka strobe) or Speedlight. And sometimes I only have access to my athletes during midday sunshine hours. Overpowering the sun with flash from some distance requires a lot of power. It is for these reasons that the need for more power / more output of light is sometimes needed.

The Profoto B1 500 Air produces 500ws of beautiful light, all wrapped up in a lightweight mono unit (flash head, power pack, and battery combined) …it sells for about $2,100.  And a kit is available with 2 B1 strobes, Air Remote wireless trigger, Quick Charger and backpack for about $4,150  …I purchase all my gear at www.robertsimaging.com

What’s the Power Difference of the B1 vs. 4 Speedlights?

One Profoto B1 and 4 Nikon or Canon Speedlights will produce about the same amount of power output …500ws. But there are a couple of Profoto accessories that can help increase the illumination capability of the B1 to about 1200ws of illumination on the subject.

NOTE: It is the “illumination” that increases, not the ws power of the unit.

How is more illumination from a Profoto B1 possible?

The first accessory I add to the B1 is the Profoto Tele-Zoom Reflector ($730.) The Tele-Zoom is a very deep and highly polished reflector, that when mounted to the front of the B1 will “concentrate” the light into a narrower spread of light, which increases the illumination on the subject by 1 FULL stop.

The second accessory I add is the Profoto Clear Glass Plate ($53) which protects the flash tube. The B1 comes with a “Frosted” Glass Plate, which is designed to help spread the light into a soft box, but its opec frost reduces the amount of illumination. But I just want a BIG BLAST of FLASH to illuminate my athlete …so, I use the Clear Glass Plate which increases the illumination on my subject with an additional  1 / 2  stop of light.

Now my 500ws B1 is now illuminating the subject as if it had 1200ws. This would rival the power output of an Elinchrom 1100ws Ranger pack and “S” Head.

But isn’t the Tele-Zoom Reflector expensive?

Yes ($730)…But you will eventually need to purchase the PocketWizard FLEX TT5 to achieve High Speed Sync …High Speed Sync is already included with a Profoto B1 strobe.

And most important of all, the Profoto B1 and its wireless Air Remote trigger is a “dedicated” High Speed Sync system. It has been my experience that it works 100% of the time.  And that reliability is paramount for me to conduct business with top athletes and clients.

Do I still use my 4 Nikon Speedlights and Foursquare?

I’ll won’t be giving up my 4 Nikon Speedlights and FourSquare, but when I need a more power from a greater distance to my athlete, I’ll use the B1, Tele-Zoom, and Clear Glass Plate.

Here is the basic lighting configuration that I used for each of the images in this WATR article.

I used a basic “Cross Light” configuration where the subjects are in the middle. For the Soccer Dual (images 1-4) the B1 units are about 15 feet from the subject giving a 30 foot wide “Zone of Light” for the athletes to perform in.

For Game Face (image 5) and Sky Scissor (image 6) the B1 units were placed in the same Cross Light configuration, but were slightly closer to the athlete at 10-12 feet from the subject.

I will be using Manual exposure settings. This is for consistency regarding the exposure of the available ambient light in the scene.

I will be using Manual power settings on the B1 …not TTL. TTL works great to “average out” the ambient exposure and the flash exposure to make a “balanced” picture, which is perfect for a family portrait …but I want drama and stylization for my dynamic athletes. Thus, I use Manual power settings. 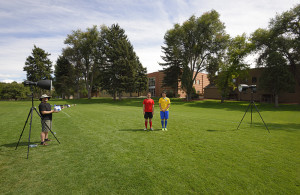 This image shows only the available Ambient light exposure …NO FLASH.

It is a Manual exposure setting that I simply used the meter inside the camera’s eye-piece to achieve. Although there are some thin clouds in the distant sky our shoot location had total sunshine at 12:00 noon – 3:00pm. 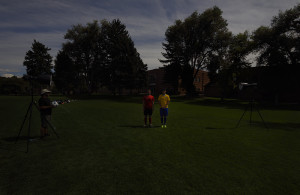 The second step was to purposely underexpose the scene by -2.3 stops and make a test shot NO FLASH. This was so the background (the school buildings) would become a dark backdrop for my athletes to “Pop” out from when lit by the two B1 strobes. 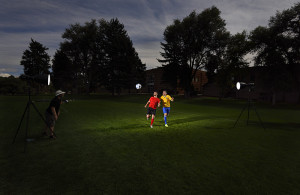 The third step was to make a TEST shot with each B1 unit at FULL Power which is the number 10.0 on the B1 display. If my subjects were too bright I would either reduce the power or move the units farther from my athletes. I do not use a hand-held light meter, but simply judged the exposure on the cameras LCD screen…10.0 power looked perfect. 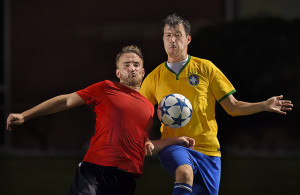 My test is complete and my athletes are exposed to my liking as I judged the TEST image from the cameras LCD screen. I’m now ready to shoot soccer action when my athletes are in the “zone of light” between my two B1 strobes.

I am about 30 yards away using a Nikon 600mm f4 lens so as to simulate actual distance to athlete during a typical soccer game. I used f8 for some depth of field, and I used Group Area AF. The cluttered background of the school is almost unnoticeable thanks to the -2.3 stop Underexposed Ambient.

My athletes “POP” out from the darkness thanks to the 2 Profoto B1 strobes, while the long 600mm length lens effectively softens the background to look more like a stadium night game. My shutter speed of 1/2500 easily freezes the action thanks to the High Speed Sync capabilities of the B1. I have easily overpowered the midday sunshine and done so with my two Profoto B1 strobes with Tele-Zoom and Clear Glass Plate accessories at a very safe distance from my athletes and flying soccer ball. 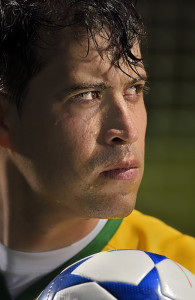 By simply moving our lighting set-up in front of the soccer goal I again placed my athlete in the middle in between the two B1 strobes and also kept my same -2.3 Under Exposed ambient settings. I have moved each light closer to the subject …each B1 is about 10-12 feet from the subject, thus I decreased the Power from Full power 10.0 to 8.0.

I had the athlete turn his head and look directly into the B1 unit to his left. The second B1 is to his right and slightly behind …this gives him some “Edge Light” on the back of his neck and jaw. The sunlit hill of green grass behind the goal catches the direct sunshine and is seen through the net, giving a soft “net pattern” backdrop for this portrait.

We are nearing the end of the shoot at 3:00pm. My athlete is still performing in the 3:00pm sunshine … clouds have formed in the distant sky and look great … and from my low angle laying on my stomach they made a fantastic background behind my athlete.

I kept my lighting configuration the same “Cross Light” configuration as has been used throughout the shoot … my athlete is again placed in the middle. Each B1 unit is about 10-12ft from the athlete (depending on where he jumps) as he performs a scissor kick and lands on some soft pads. Each B1 strobe unit is set at FULL power 10.0 on the display.

I wanted more Depth of Field as I wasn’t certain how wide spread his legs would be and how close the ball would come to the lens. I added a polarizer filter and increased to ISO800, 1/2500 at f11, which Under Exposed the sky by -3.0 stops. I used a Nikon 16-35mm lens with Polarizer filter and then increased the Contrast setting in the Picture Control (Standard) menu of the D810 camera. This made the clouds really look absolutely amazing!

I really like this image … the strobe lit action is frozen thanks to 1/2500 and High Speed Sync. My athlete “Pops” out from the -3 stops Under Exposed sky. My athlete is only 3 feet away and kicking straight at me. With the Nikon 16-35mm lens (at 19mm) I seldom saw the ball come into the frame and must admit that I blinked on several kicks as the ball appeared to come directly at the lens.

WRAP UP:  I am so pleased with the Profoto B1 500 Air battery powered strobe system and its reliable High Speed Sync performance. Set up the B1 strobes, Manually under expose the ambient by -2.0, -2.3, -2.7 or even -3.0 stops, …and then reveal your athlete from the under exposed scene with illumination from the B1 strobes and see the stylized Sports Action imagery “POP” off the camera’s LCD screen.

I hope all of you have enjoyed this month’s in-depth WATR article.  I’m always happy to answer questions that are sent in via the contact page of my website …so ask away, and I’ll send you an answer.

See you next month here on WATR.  ….Adios. Dave